I spent the better part of my day at the Sydney Writers' Festival. I took you all with me and we had a fabulous time. This is what we saw as we walked towards the wharves which house the festival. 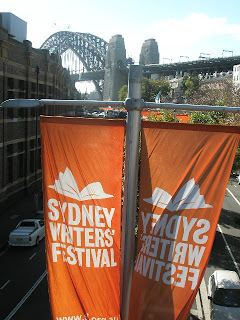 This is one of the wharves as we first glimpsed it. Throughout the year, this wharf actually houses the Sydney Dance Company, you know...the place I tried to describe a while ago. 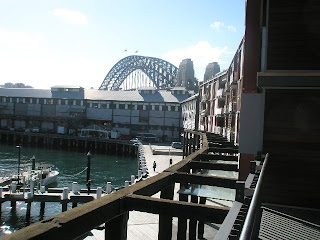 The first thing that struck us was that there were a lot of man-bags around the wharf, like this one: 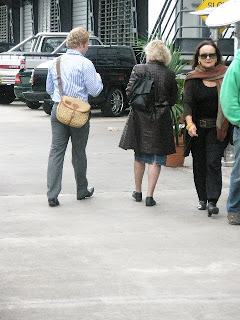 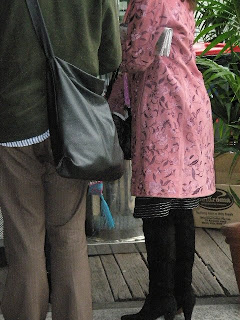 But this man was our favourite, because he also had a fabulous hat and umbrella, and he smiled at us as we passed him. He was chatting with two lovely-looking women. 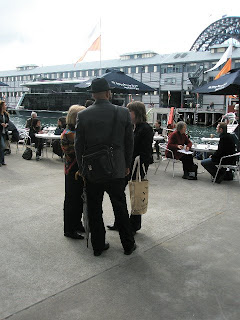 When I saw these ladies I immediately felt that they must be fellow-bloggers. Like them I had chosen to wear my black boots to the Festival, and was tempted to say hello to them. But you all reminded me, and rightly so, that this was REALITY, and that bloggers do not really exist here at the wharf...it is all in my head dammit. 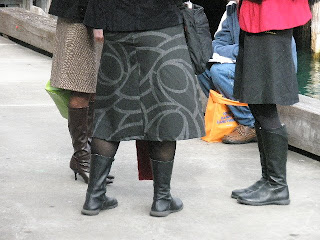 I almost stole these shoes from under this woman's feet. I felt that the shoes told an entire story all by themselves, without ever taking pen to paper. A few of you asked me to stop taking photos because you were scared I might be labelled as a pervert and carted off to the local police-station. But NOBODY notices you taking photos at a writers' festival, because everybody is far too busy READING or TALKING ANIMATEDLY ABOUT READING. 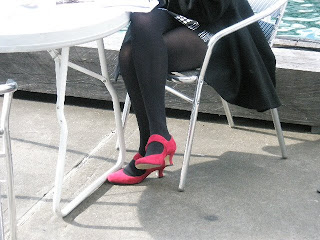 While we were lining up for "Women Going Bush", I noticed this young woman: 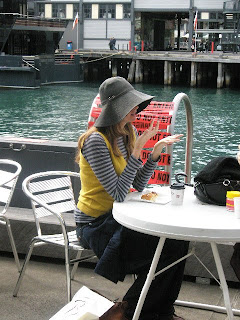 She took my breath away. Then, a young man sat beside her, and his appliqued hoodie matched her so perfectly, but she never turned around to look at him. She was far too busy talking animatedly about books to her fabulous friend, 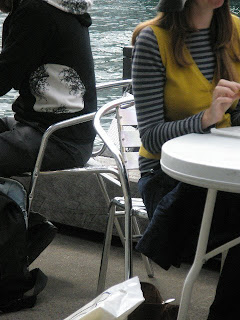 who insisted on opening her parasol at that very moment, even though it was quite cloudy. 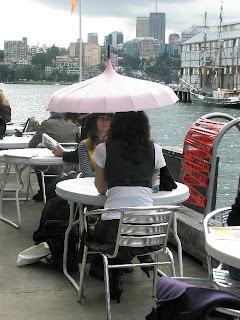 Those two certainly were intriguing, but later we spotted this young woman... 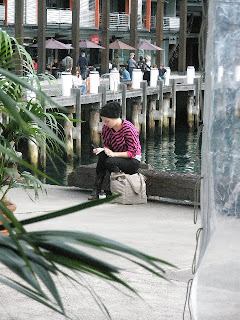 and we had great fun imagining what it was she was scribbling down so furiously in her notebook.
Soon it was time to enter the Aladdin's cave of all writing festivals - the bookshop. Much to our surprise (and joy) we found this darling doggie lying strategically in our path. 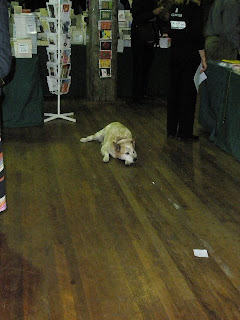 We stopped to admire her, and talked to her owner (the shop manager, at least...that is what we presumed) who told us that she was a twelve-year-old red cattle-dog called "Spot". He was a bit embarrassed about the name, saying that his daughter had chosen it, but that he feels that she should have been called "Blue", and he even went so far as to say that in his opinion all Australian cattle-dogs should be so named. Now this made us all burst into hysterical laughter because, as you well know, I do indeed have a cattle-dog named "Blue". 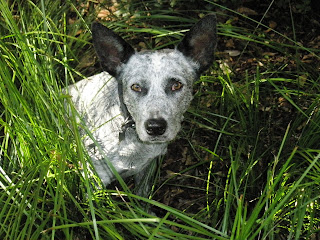 After much browsing, we wanted to buy approximately 50-60 books, but this was clearly not possible. Instead, this is what we chose: 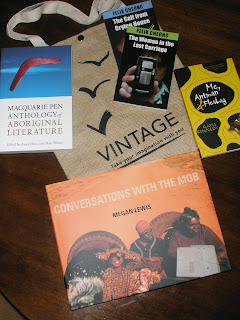 As you well remember, after much debate, we decided that we would concentrate on new and innovative books which were written by, or were focusing on, aboriginal writers and communities. You see, we had been extraordinarily inspired by Megan Lewis who speaks just as eloquently as she writes and photographs - a most extraordinary woman. We added a couple of small books by Felix Cheong because we had a strong gut feeling that our teenaged children would enjoy his writing. This gut feeling was based on the fact that we started to read one of his books at the shop and couldn't put it down. Of course, all of the books came with a complimentary canvas Festival bag, which we simply adore.

Then it was time for lunch, something we had been anticipating with great delight as writers' festivals are well-known to be centres of gourmet excellence. We were not disappointed in this regard as we happily sat and munched on our vegetarian penne and surveyed the scene around us. An older woman and a young man walked past us at a leisurely pace, allowing us to overhear a snippet of their conversation. The young man was holding the older woman's arm and saying "I know you SAY you don't want it, but I WANT to buy it for you, as a gift, and I SHALL buy it for you." The older woman turned to him lovingly and patted his arm. I turned to you mob and asked you what you thought - were they grandma and grandson? and you all nodded in agreement. 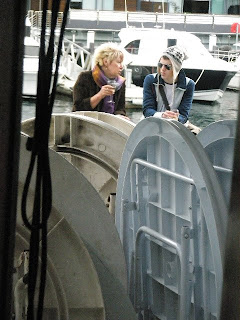 As we were about to leave our table, I spotted the grandma and grandson again. They were chatting away, each holding a glass of white wine. We all had a little tear in our eye at that very moment, and agreed that it was our fondest dream to one day be such a grandma to such a grandson.

Now, that in itself would have sufficed as a superb ending to our day at the Festival. But then it got even better. For just as we were making our way out of the building we saw Spot, once again strategically placed in our path, perfect Australian writers' mascot that she is. 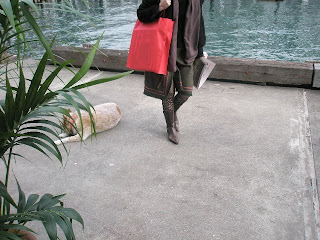 See Spot lie. See Spot run. Run Spot run. That is, after all, where most of us started our reading. And just look how far we have come!
THE
END
Posted by Eleanor at 11:17 PM

It was a great day. I had such a grand time sharing it with you. Thank you!

A great day - and perfect photos. I love seeing those ladies and want the boots and that hat!

I started reading The Bone People by Keri Hulme this winter but had to give up. I was working way too many hours at the time to have the mental energy left at the end of the day to read anything heavier than the back of a cereal box. Should I pick it up again?

I would totally have helped you steal the red shoes.

That young woman with the big hat and the striped shirt could have been my sisters daughter...but I know she's not in Australia now =) and have never been...

I had a wonderful day in Sydney. Loved all the people-watching we did. (Especially covet the ultra fabulous floppy-brimmed cloche hat and pink parasol.)

Wish I had been there! People talking animatedly about reading and writing everywhere, sounds like heaven to me ;-) Is the festival an annual thing?
(By the way I found you through Maria's blog.)

Thanks for being such a great tour leader.

What a fabulous way you have of loving the moment. I loved being there with you.

That was fun! Thanks for taking me. And, how can I guarantee that I have a grandson like that one day? It looked like they were having a wonderful time together.

They must be Sydney boots, those flat black things cos I had coffee with Bec last night (jealous much?) and she was wearing boots just like that.

That's why I was absent from your writers' festival tour. Sorry. Looks like you all had fun!

That black boot look is quite prevalent here on the west coast.

You have inspired me to check out our own Writers Festival when it arrives.

Thanks for the tour.

Hm. And I all I did was go to BJ's for paper towels and toilet paper. I think you win. ;)

eleanor, we do have the most fun together, don't we?

I loved the man-bags, the boots, the parasol, the grandma and her grandson, and Spot. People-watching should be an Olympic sport. The medals would be determined by whomever came up with the best back-stories...

You would definitely get the GOLD.

Oh shoot, got the word verification wrong and deleted all my comment..!
I said (more or less) this was just the kind of excursion I needed with my running nose and a slight temperature and not feeling very sociable. Next time we must not leave any attractive shoes behind, though. A bit disappointed there, Eleanor!

Forgot to say that I'm quite pleased with the books we bought, looks really interesting.
Can't wait to read!
Roses not from my own garden, alas. My friend Misan has an early blooming kind, that also smells wonderfully, it's magic even for my tormented nostrils.

I'd better answer your questions on your blog. The "jewellery" was a gift from my 11 yrs old daughter to me on mother's day, which is today in Sweden. The mailorder consists of nine garden plants, and they are a little mystery to me as well since I'm not to sure they will actually grow. The quote from Cicero goes something like "If one owns a garden and a collection of books one doesn't need anything more" so I try to go by that device! You're welcome back to visit my blog, thanks to blogging one can easily move between continents ;-) I'd love to go to Sydney next year for the Writer's Festival!

Hi there! I just found your blog and was so impressed,fascinated and happy by what you wrote that I instantly had to link you to mine. I read, and read and read....Your style is very much your own like no other blog I`ve read.

So happy I found you! Will be back soon!

PS Hope the linking is OK with you?