And then she stole my thunder

This is another book in my library. It is volume II of "Albrecht Durer" by Erwin Panofsky. I found the colour of my thunder in it: 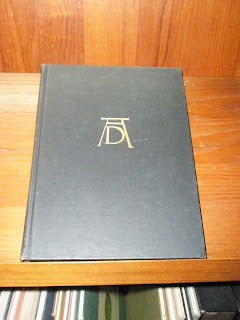 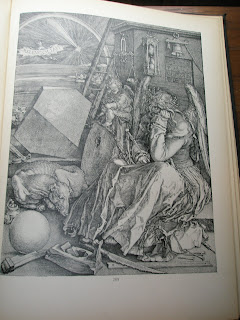 The title of this engraving is "Melencolia I" 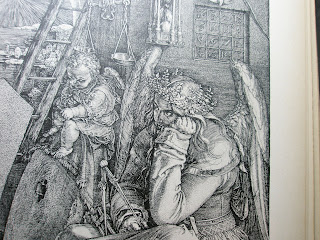 There is thunder in her eyes
And it just comes out on Fridays
And its colour is a mean and ugly black.
And she takes that sticky thunder-colour,
Puts it in her pocket,
But the thunder stain,
It just keeps coming back.
And she used to try and say
To her dear ones on that day
That the thunder
Was the colour of her love.
But both she and they knew clearly
That the thunder very nearly
Blacked out all the other colours
With its shout.
____________________________________
I was going to leave it at that.
But then, just before I was ready to post the thunder and send it on its way, I thought to myself (as one does) "let's just quickly check out eurolush's blog."
And then she stole my thunder.
Yes.
Her blog was so sunny, cheerful and humorous....and all wrapped up so neatly in that special eccentric funkiness that is eurolush. Her post took my scowling thunder of a face in its two little hands, and forced my frowning mouth to raise itself into a smile. There might even have been a chuckle or two to be heard, instead of that dark, forbidding shout that was.
So that's how eurolush stole my thunder. It was just lucky that I had captured it quickly on this post before it was gone for the day. Because A and M are counting on me, you know.
Posted by Eleanor at 3:07 PM

Oh, the books you have! What a wonderful library it must be.
I have now consulted some books of phonetics and thought since you are such a polyglot, you'll enjoy reading it. Will post a photo of this r-e-a-l soon. And your poem is thunder, all right.

Eleanor, I could never steal your thunder.

But I may well try to steal other things from you.

And your ease with words.

And your adorable blue shoes.

Those things I'd love to steal.

I have found Eurolush through you for which I thank you!

Let's see - around 4.30 pm we wandered across the road to Burrows park and then sauntered via road and cliff paths and beach over to Gordon's Bay (I think it is called that) - not very far but very lovely!

Albrecht Durer gives me the creeps. Have you seen his witch drawings? Ghastly and gruesome.