Much has happened today. In fact, today seems to have lasted at least a week. I shall attempt to capture the highlights:

Very lucky to have an early match as the temperature here rises to 30 degrees by 10/11.

"The 1st set was bad. All of my finishing shots were going out because he could run really fast and was returning a lot. Still, I won it 6:3.

At the beginning of the 2nd set my opponent was still in it. Then I figured him out. What I mean is that I figured out the combination of shots that worked, and that he didn't like, so then he lost heart around 3:0. I ended up winning the match 6:3, 6:0." (my emphasis)

Even though I know it's only a BALL GAME, it still makes me sad to see a boy lose heart. At the same time, I am relieved that the boy losing heart is not MY boy. Sports psychology is an emotional roller-coaster. I'd better make sure I'm strapped in tight. 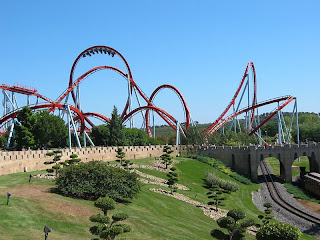 We had several hours free until match number 3. I spent much of that time sitting on a bench, under the shade of a tree in the park opposite the tennis centre. It was very peaceful and cool there, and I was well-prepared with books, and my ever-present notebook&pen.

The first thing I noticed was how HUGE the sky looked from where I was sitting. It was awe-inspiring. 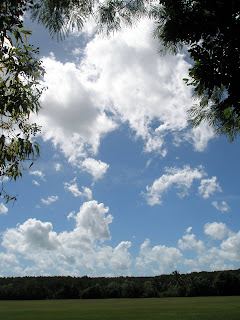 Then, it came to my attention that I had some very pleasant company - a fellow tennis parent had set up his chairs behind me. I liked him so much that I secretly took a photo of him. 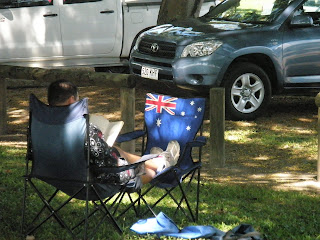 Then my son came running to tell me that he was about to start his match. He was up against a very strong player in windy conditions, and it was damn hot. And...um...he lost. The score was love, love (that's tennis talk for 6:0, 6:0) HOWEVER (and check out my use of tennis terminology coming up) the score line says it was a blow-out, but it was closer than it seems. Many of the games were very close, going to deuce again and again. I also didn't have a headache, which is always a very good thing.

Now I will tell you my naughty little secret...come closer...shhhh....promise not to tell.....I am secretly a little (just a teeny little bit) relieved that my son is out of the tournament....shhhh now....you promised....because, you see, that gives us a whole day tomorrow to go to this place: 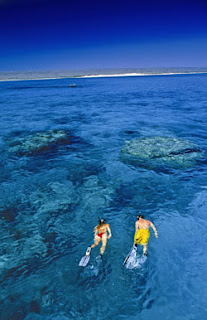 I knew you'd understand!!!! And I promise, I really do, that if you keep my little secret I will take you along with us!!!!!

I meant to sign off with that, but I simply can't...there are many little details which I meant to convey to you, and I have not. So, without too much fuss, I present you with.....the next post, please see above.....

How MUCH competition and tennis talk can a mother take knowing a lovely boat is waiting in a big blue sea?
HOW MUCH?????

Have fun in that fabulous blue sea.