Tennis-playing boys have a confident way of walking. I call it "the tennis strut". It is formidable. Supermodels could learn a hell of a lot about posture and grace from watching these boys walk.

Fashionistas and tennis-playing boys have an additional connection, they both love their bags. The bigger and fancier and more expensive the better. But these boys REFUSE TO PLACE THEIR BAGS ON THE ASSIGNED SHELVING. This drives me insane! 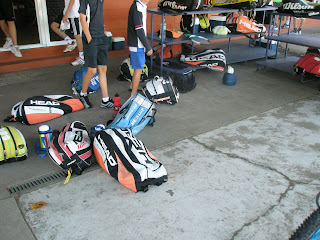 Tennis-parent etiquette is unique. Do not be fooled into thinking that a friendly smile and greeting, given to the mother of your son's opponent, will be interpreted correctly.

Clapping, verbal comment and body language are the 3 land-mines of this etiquette. The rules are so intricate that it is best to avoid all 3 areas. Bring a huge sunhat, a large pair of sunglasses, and your best poker face.

The most beautiful tennis gesture is that made by a player the very second after his opponent has made a clever, skillful and unreturnable shot. It involves the tapping of the palm of one's hand on one's racquet strings while looking at one's opponent with admiration and stating "good shot".

There is a great deal of waiting around at tournaments, and this is often (but by no means always) due to rainy weather, especially when hard courts are being used. Therefore, you cannot truly classify yourself as a tennis parent until you have been handed a long-handled squeedgie and asked to clear court 3.

My favourite tennis phrase of all time: "He won convincingly."

Best overheard phrase at the Cairns tournament, said by a 14-year-old girl to two friends as they walk by hand-in-hand: "I haven't lost 6:0 this WHOLE tournament."

Best on-court fashion statement at the Cairns tournament: the two 12-year-old girls, playing together in the doubles, each wearing a fluoro green shoelace on left shoe and fluoro pink shoelace on right shoe. They were both wearing shorts and t-shirts, but different colours and styles. Their opponents looked exactly alike in teeny-tiny singlet dresses in Barbie-pink, blech.

Every single tournament, without fail, has at least one "incident" involving a ROGUE RELATIVE. Sit and wait, it will happen, yes, it always does....it might be a mother who slaps her son in the carpark because he played poorly. It might be a father who yells at his son (who is still playing on court) "stop playing like your bloody mother." It might even be an aunt or an uncle, sometimes it is a sibling. BUT IT ALWAYS HAPPENS.

So, did it happen at the Cairns tournament? You may well ask. Yes, indeedy. Twice. The first rogue relative came and went while I was sitting in the park. Most unfortunate, or maybe all for the best. I knew it happened because as I was walking around later I heard quite a bit of talk regarding a grandmother. Yes, I know....it's the first instance I have ever heard of a rogue grandma. Unfortunately, I couldn't quite make out the details, but I know that a referee had to be called to "control" her.

And the second rogue relative you ask? I was there for this one. I should warn you though, it was pretty ugly, and I'm almost tempted not to relive it here. I think I will simply say this:

I now know that there IS something worse than seeing a boy lose heart on court. It's seeing a father take a daughter's heart, while she is on court, and lose it for her, on purpose.

But I still remain stubbornly optimistic in my view of competitive tennis.

The rogue relatives, you see, are not related to me.

And, anyway, my son and I are going to snorkel at the Great Barrier Reef tomorrow!

Labels: Maybe not so trivial

Oh I could not do A MINUTE of what you are doing. Barrier reef included.

It's wonderful to read about though.

I am on the edge of my seat wondering how a smile or clapping could be misinterpreted in the competitive tennis context. Please elicidate if you wish.

Doesn't it feel wonderful NOT to be the rogue relative? And to know that your son played very, very well, just well enough in fact to allow you two your snorkel on the GBR? Congrats to both of you!

You can join in by posting cute little tropical fish! (I can't get over this tropical thing, it's obvious.)Or tropical flowers.
If your monday comes sooner, does that make my sunday go away quicker??

Snorkling at The Great Barrier Reef blows cycling in the German countryside out of the water.

Imressive how you figured out the Swedish words - the real meaning however was:
"We commented at each other's exactly at the same time". You may be disappointed to know that verandah in Swedish is "veranda".
You lead a happier life not sewing or knitting - at least sometimes - I just spent the evening ruining the fabric from the photo. No skirt yet.