I am going on a bit of a holiday for a couple of weeks, so there will be a pause in my posts. I hope to return refreshed and rested.

I thank you for your comments and look forward to more good times when I return!

Some of you may remember the story of Snow White. Well, guess what people??? Snow White has a sister, and Eleanor is most unhappy. Yes...Eleanor - that ugly hag of a witch - is, ONCE AGAIN, being eaten up with ugly, green jealousy of the most poisonous and horrifying kind. It's getting UGLY people. And you know why? Because Snow White's sister is none other than Sleeping Beauty, aka Princess Aurora. Not.happy.people.

Oh, sure, Snow White can TRY TO DISGUISE THE FACT THAT SHE HAS A FABULOUS FAIRYTALE SISTER WITH HAIR THE COLOUR OF THE RISING SUN AT DAWN. But Eleanor can very easily see through those flimsy optical disguises. And we ALL KNOW, don't we now, that the stories of Snow White and Sleeping Beauty are ALMOST EXACTLY THE SAME. They both involve BEAUTY, LOVE and...something which Eleanor hates most of all....A HAPPY ENDING.

Here is a picture of Princess Aurora, posing shamelessly while visiting her beloved sister Snow White. As you can see, she has befriended the beautiful, friendly and, yech, cute animals of the German forest. How sweet. 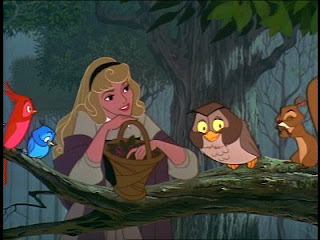 But who is this we see now...standing over Aurora with an evil glint in her eye? 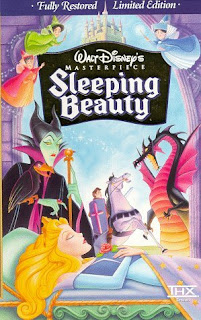 Indeed, it is the horrifying, terrifyingly angry Eleanor who is plotting evil as she ponders the fun that Aurora has with her beautiful sister as they spend the long summer days in each other's company...laughing, joking, smiling, happy sisters that they are.

But Eleanor has a plan. You just know she does....and revenge comes so very easily to Eleanor, hehehe. For what is that strange, dark bird which Eleanor is carrying on her sceptre? 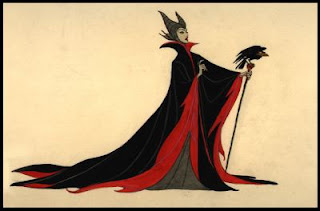 Why...could it be.....perhaps I am mistaken...but it looks...very much....like....ummmm.... well...dare I say.....Ben the Hawkman's hawk!!!!!!!!!! Could it be, please god, say it isn't so...but could it possibly be....that while Snow White has been far away in the land of fairytales, visiting and having fun, oh so much fun, with Aurora (hsssss...), revengeful Eleanor has sneaked into Snow White's village, and befriended the Hawkman? Could it be that she has had a beer (or two) with Hawkman at Trafo, and then tamed the wild, hawkish renovator so that he gave her the grand tour of his newly built castle and then, oh yes, you know it's true....he allowed her to hold his most prized possession? Now, now, ladies, settle down.....

and, if any other fabulously charismatic, cutely adorable, or fantastically entertaining sisters want to turn up...

A conversation with Grandpa

My grandparents had a dear friend who died many years ago. He was a white-haired sculptor who lived in a tiny studio which smelt of wood shavings and old age. Before he died, he requested that his tombstone be engraved with the following words: “The bitterest truth is better than the sweetest lie.” My grandfather has outlived his dear friend by many years, and he likes to ask me: “So...El....tell me....what is this thing called truth? Does it really exist?” I answer that some truths are open to debate, but others are irrefutable. I make my grandfather laugh.
Posted by Eleanor at 9:45 AM 5 comments:

A picture tells a hundred words

Balmoral on a cold, sunny winter morning. It hints at past summer love, teases with the reminiscent colours of hot-weather friendship. A single white sailboat passes between the heads, and the thick clouding of tomorrow hangs in between. You could, I suppose, photograph the view in a hundred different ways, but all would be false. It would look like a deserted summer postcard, instead of what it really is – an urgent souvenir of all the summer days we lost in thoughts and worries and money-making moans. A couple of children running down the stretch of sand, destination unknown. Picture perfect.
Posted by Eleanor at 6:05 PM 2 comments:

I was robbed yesterday, while walking home from the library. My robber was a tall woman with short, dark, curly hair. She didn’t look dangerous. That was her disguise, allowing her to sneak up behind unsuspecting women and rob them. She smiled at me sweetly and said “Excuse me, do you know the way to a guaranteed happy ending?” I answered “No, I’m sorry, I don’t.” “Oh well, never mind,” she said, and turned and walked away. When I returned home, and checked my pockets, I realised that she had stolen one hundred words from me while we were talking.
Posted by Eleanor at 8:20 AM 5 comments:

I have a dog in my house who is loving, but very anxious when guests arrive. He barks at them. He is what people call a “rescue dog”. I like the way he feels, and he smells good, and we run together every day. He keeps me company as I write. But it is hard to entertain guests. Sometimes I think that he is my inner introverted self, materialised in dog form. As I chat with my guests, I am secretly counting the minutes until I can be alone again in my study with my writing, and my loving dog.
Posted by Eleanor at 9:32 PM 7 comments:

Nine in the morning, standing on the pavement in Strathfield, talking through the wire fence of a tennis court. New coach, new courts, new plan, far from home and cold. I nod. I smile. I leave. Walking up the road I look in the window of a Korean restaurant, filled with noisy customers sipping breakfast soup. Settling in a cafe I call my husband. I am pessimistic and annoyed, he is optimistic and excited. I return at eleven to talk through that fence again. The new coach says thirteen is the age to decide whether you are serious or not.
Posted by Eleanor at 5:22 PM 3 comments:

[I am setting myself a challenge this week. I will blog daily for seven days, and each post will consist of exactly one hundred words. Not one word more or less. One hundred words to convey my day.]


Jamie cuts my hair, but he left. So, Georgia. I worried, but one look, and I knew I was safe. Petite, pale, straight black hair very short in the back, and then two razor-sharp triangles of hair hanging down each side of her face. A tiny silver stud nestled into the indentation above her upper lip. A cream knitted sweater with knitted cherries attached. Skinny jeans, red ballet slippers tied at each ankle with a bow. On the top of each foot, a blue diamond and red bow, tattooed. She says she bought the shoes before she got the tattoos.
Posted by Eleanor at 6:15 PM 6 comments: