Hello Julia, Mary, kmkat and CL. There you are in my commentboxes, making me smile. My goodness, your presence takes me back to those years of fun and games we had - sharing poems, witticisms, sketches, photographs and a treasured, knitted scarf.

To answer your questions, the new background is simply one offered by Blogger for free. As far as my news from the past year - I was commissioned to adapt a book into a romantic comedy screenplay, a project which took up most of my time for the past two years. As it's the first screenplay I have ever written I had many obstacles to overcome. I am just beginning to learn the craft and I doubt it will ever see the light of day (or should I say - cinematic light) but it's finished to the best of my ability and I'm looking forward to my next project. I'm currently exploring ideas for a children's film, as well as toying with the idea of a graphic novel. I also now work as a screenplay consultant, helping other writers bring their vision to the page and the screen.

I would never have had the courage to do all of these things if not for the years of joy I experienced while blogging.

In the words of Diana Wynne Jones:

"If you love people and things enough then sensational things happen. It is, if you like, a form of wizardry." Our blogs were really love letters to the world, to each other, to ourselves.

Here is the awesome Diana Wynne Jones talking about her novel "Howl's Moving Castle" and its adaptation by Miyazaki into the animated film of the same name.


Here is the trailer for the film:

I can hear the echo of my greeting, this blog has been that empty for that long. In fact I am greeting myself, returning to the magical place where for several years I wrote words in an attempt to connect fantasy with reality. Welcome back Eleanor.

The magic spells worked. I have the proof in the shape of a circle of friends - fellow word artists of the highest order. Also, a new career in which my words and images have taken flight and reached two or three people who have stopped and read and listened, even paid me for my services.

But this blog, much like Howl's Moving Castle, is my only true portal to the fantastic lands in which I am happiest. 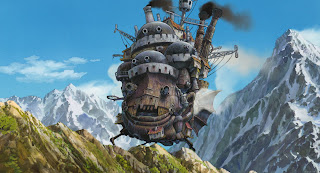 This is certainly not a state-of-the-art blog. It's clunky, dusty, worn around the edges, but it travels well enough and has access to all four doors necessary for true happiness. And no I'm not going to tell you what those are, they're different for each person so it's of no use to even ask.

I can, however, give you a metaphorical tour of the place. Follow me.....

A dear friend of mine and fellow screenwriter co-wrote and co-produced a TV pilot/teaser for the Optus ONE80 PROJECT competition.

It was chosen as one of the top ten entries!!

Here it is, titled "Deadbeat Dads". I'm so proud and excited for Shelley and her team!!!