When I was in Manhattan last year I was giving a friend instructions on how to get to my apartment; I told her "There's a Starbucks on the corner," and she laughed hysterically.
Because there is a Starbucks on every single corner.
This clip perfectly captures what I love about the Aussie sense of humour.
Strangely, it also makes me miss Manhattan.

Stop what you're doing, sit down, watch these videos.
Isn't the (blog) world a wonderful place?
So much beauty.
Posted by Eleanor at 7:22 AM No comments: 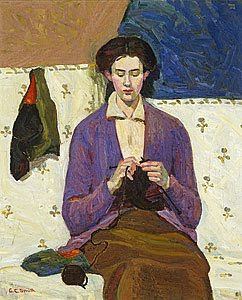 This painting by Grace Cossington Smith is called "The sock knitter". It was the first painting this young Australian artist exhibited in 1915.

I've seen this painting many times and always loved it. It calms and soothes me. Upon my return from Sewjourn last Monday I suddenly felt a need to revisit the painting. It captures the feeling I had as I sat in the studio with my fellow bloggers and concentrated on my newfound hobby - crochet.

I think I'm the quietest of the bloggers at Sewjourn. I adored sitting on the brown velvet sofa at the edge of the room and listening to the chatter and laughter. I spoke up once or twice, when I felt like it, but mostly I just listened and loved.

I suppose that listening and loving has been my hobby for many years now, and is probably the reason I was first attracted to blogs and their commentboxes. When I read a person's blog I can get that rare and wonderful insight into her view of life, and there's no pressure to comment back. Oh I know, there are statistics to think of, blog traffic and number of hits and commentbox counters. But my favourite thing is to read, listen, ponder, love.... and then put some words into a box and send it on its way.

Sewjourn reminded me how important it is to slow down and take time to just listen and feel and think. It doesn't necessary help or solve, it doesn't always improve or illuminate, but that's all right. There's no rush.

Blogging often feels like a mad rush. Quickly typing up experiences before they're forgotten, linking, photographing, inserting. And yet blogging, at its very best, has led me to wonderful moments of quiet appreciation such as my treasured trips to Sewjourn. Moments of reflection in the midst of a group of women I could only have met via blogging.

That little commentbox of mine has taken me on a series of memorable journeys, all of them beginning with a quiet which is captured so perfectly by the sock knitter. 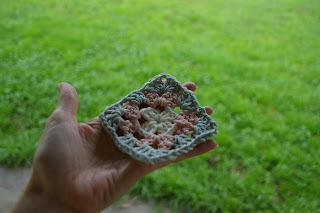 This series of posts is inspired by the recent Academy Awards. But I should warn you, when I watch the awards and think of the films my mind wanders in its own unique... how shall I put it ... direction.

This explains why I found Natalie Portman's walk up the stairs to the stage so very moving, and why this is the highlight of the Best Actress Award as far as I'm concerned. It reminds me of when I was pregnant with my first baby - Ms. Portman's partner's gesture reminds me of my own darling Mr. CB's gentle care as I made my way up and down the stairs to and from our tiny apartment. Naturally, I was HUGE in my last trimester, would never have fitted into any evening gown of any description, was often in a foul mood, and spent a lot of time worrying. But that's another story.

So these are my thoughts on "Black Swan" - a window into my strange imagination.

Firstly, I should mention that I saw "Black Swan" with my father, and that in itself merits an award. I knew that my dad wasn't enjoying himself, and I knew he wouldn't like the film. But he needed to see it for his work, and my mother refused to see it, so I joined him. My father worries about me during violent scenes (he forbade me from seeing "Kill Bill" years ago and was terribly disconcerted when I told him that I loved it). So every time something vile occurred in the film, which was quite often, I could feel him trying to stop himself from embracing me protectively and insisting that I leave the cinema. The lesbian sex scene was uncomfortable for completely different reasons, it just felt so wrong to be sitting next to my dad as those two girls went for it. For what it's worth, heterosexual sex scenes are just as uncomfortable, but that was no consolation at the time.


Secondly, I have a history of EXTREME EMOTIONAL ATTACHMENT to ballet stories and films. I never took a ballet class in my life and never will, but the world of the ballerina has always intrigued me.


My friend O. and I (my Russian schoolfriend who would eventually introduce me to Mr. CB, who is Russian too) had a huge crush on Baryshnikov for many years. Needless to say, when Mr. CB first introduced himself to me and I heard his Russian accent, and he told me that he had studied ballet as a boy... well.... need I say more?


So maybe you've seen the film "The Turning Point"? It was written by Arthur Laurents. Or "White Nights"? Written by James Goldman. O. and I did, many many times.

Yes, I come to "Black Swan" with a lot of baggage. I liked the film for what it was - part thriller, part horror, part fantasy. But I missed the love, the laughter, the romance and the heartbreak of my favourite ballet films.

At first I thought it was misogynistic, and the first twenty minutes really are relentless in that regard. But then the story takes off and I found myself immersed in the crazed world of this artist who succumbs to absolute perfectionism in her dark world of manipulative and egotistical colleagues. It captured my imagination and my interest, but it left my heart untouched.

I yearned for poor Natalie to be given a friend or a loving father, or if not then at least a bit of a sense of humour. I needed to let go of some of the angst and horror and have a little laugh; the contrast would have made the story all the more powerful.

Dancing should bring light as well as darkness into the world of both the dancer and audience; couldn't the tiniest crack of sunlight be allowed into the world of "Black Swan"? No. That was not part of Aronofsky's vision, and that's fine. I can live with that.

Here is a palate cleanser:

Baryshnikov and Hines dancing together in "White Nights." Because life's too short to see only the black swan side of life.

Can you imagine how O. and I felt when, MANY years later, we saw this scene in "Sex and the City"? Apparently we were not alone in our Baryshnikov obsession!

Oh come on, you didn't think I'd miss out on an Oscars post did you?

It'll have to be a series of short posts.

So, firstly - I hope you all watched Natalie Portman's acceptance speech. If not then here it is for your viewing pleasure. The woman is a true artist, and her performance in "Black Swan" was indeed Oscar-worthy, and look at her style and grace.

But the thing I love the most about this clip is the moment when her partner Benjamin Millepied, bless him, walked with her to the stairs with his arm supporting her ever-so-gently and then extended it in a graceful, understated movement to ensure that she was all right going up the stairs. Such a gentlemanly gesture brings tears to my eyes.

Six beautiful women from my community (the Sydney Jewish community that is... I actually belong to several communities... this blog-world being one of them too, of course) have spent years gathering recipes, testing them, and translating them into this beautiful book.

One of these woman is a treasured friend of mine, and she is also pedantic about the details and success of her recipes. Having eaten in her home many times, and knowing the pride and joy she takes in perfecting her hospitality I guarantee that each and every recipe in this book is a gem. It's also gorgeous, like she is - the photos which show the most beautiful hands... they're hers.

In my domestic world in which cooking is a drag and food is an annoying necessity, this book comes as a timely reminder to return to my roots and enjoy my time in the kitchen once again.
Posted by Eleanor at 9:06 AM 2 comments:

WELCOME TO THE WORLD DEAR BILLY

DUYVKEN HAD HER BABY YESTERDAY, A BEAUTIFUL BABY BOY.

I met dear Duyvken via her blog almost three years ago, she is a spectacular woman and I feel so honoured to share in her joy today.