The cover of a book in my library, with thanks to Joan Miro. 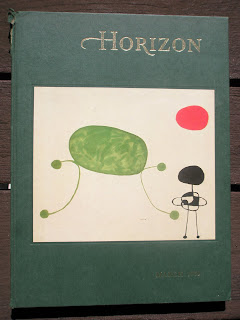 The three women sat around a small round table which had been placed under the olive tree. The table was set with a large mustard-coloured teapot and three peony-coloured teacups. The children, all ages, shapes and sizes, instantly took off at a run through the sun-dappled grass, yelling happily to each other and to no-one in particular. The dogs followed them, prancing back and forth, intent on remaining in the midst of the joyful childhood mess. This was most welcome to the three women. Silence descended upon them, and only the tiniest of bird-trills could be heard from the olive branches above their heads.

A poured the tea, M placed her silver camera against the silvery leaves and captured the moment, E scribbled something indecipherable in her tiny notebook. M and E picked up their peony-cups and peered warily at the steaming hot ocean-blue tea. A laughed gleefully and took a long, hearty sip from her own cup. M and E looked at each other, shrugged, and sipped along with A. At first, their sipping was polite, but it soon turned into a hearty gulping, for the tea tasted as good as a day at the beach.

“So, what’s next A?” asked E, with some trepidation. M put down her peony-cup, smacked her lips, and waited. A clapped her hands together once, turned to the two and said “the olive perspective.” M cocked her head to the side and opened her eyes wide, E twitched and narrowed her eyes and looked nervously around her, A laughed and said “don’t look so serious, it’s only a game.”

“What is an olive perspective?” M asked politely. “Will we have to change our clothes?” asked E excitedly. A sighed. “The olive perspective is whatever you like, and you can do whatever you like with it,” she said. “That makes me nervous,” said E ,“it’s too open to interpretation. Can’t we once, just once, do a true/false quiz?” M picked up her silver camera and pointed it at E and clicked, “here is a picture of E pondering the olive perspective,” she showed A. “Yes,” said A, “I see you understand.”

E remained perplexed, for she could not reach a comfortable, acceptable definition of olive. Was olive in fact a real colour at all? Was it not just a darker, sadder version of green? She excused herself and walked into the house, picked up the phone and called Colours the Clown. “Yes dearest?” said Colours, “I’m in trouble,” replied E, “A has assigned us the olive perspective.” After a long silence, Colours said “a martini darling,” and promptly hung up. E instantly felt better.

When E returned to the table under the tree she was shocked to discover that A and M had left without her. The teapot and teacups had been cleared. Only a few drops of the ocean-tea remained on the table, as proof that they had once sat there. As she stood all alone, staring at the table and at the three empty chairs, she heard the sounds of the children once again and looked up to see them all running towards her. There were even more children than before, and she briefly wondered where they had come from and where, oh where, were their mothers? Then, before she could say “am I to be the neighbourhood babysitter once again?” the children surrounded her and began singing and dancing.

Some of the little girls did cartwheels, the older girls had peony-garlands in their hair. The boys were boisterous and sweaty, some of the smaller boys were carrying tiny pebbles and shells. Then, amidst the merry mayhem, the tiniest boy of the group pushed his way through the crowd, and stood in front of E. He tilted his head up and put out his open palm to show her something. E kneeled down on the moist grass, thinking that this will surely stain her trousers, and looked at the little boy’s treasure.

The little boy was holding a tiny wooden ark, and inside it were even tinier little wooden animals, all in pairs. He smiled at E and then rummaged in his trouser pocket with his free hand. He brought out a tiny wooden bird, and in its beak was an even tinier wooden olive branch. He gave the bird to E, and smiled, and laughed, and then disappeared in the crowd. E called out after the little boy “thank youuuu!” and she could just manage to hear, above the sounds of crazy childhood backyard games, a high thin voice singing back to her “your weeeelcome.”

Thursday was a wonderful day after all.
Posted by Eleanor at 12:38 PM

I believe this post marks a turning point in your blogging. Because it shows very clearly where your great talent lies....

Lovely lovely post .... and I ain't just saying that because I am in this story!!

Spellbinding. So unexpected a twist on colour week.

Oh, E, I'm speechless...the mood you created in me - like Ali says, it's spellbinding. Thank you.
But you realize of course, that A and M would never leave without you!

Now you are branching out...

Dude, whatever you're on, I WANT SOME.

Have you ever read Barbara Pym?

I just read "Jane and Prudence" and I think you'd love it.

I want some of that ocean-blue tea. And some olives.