I turn to him once we’ve parked and I try to fire him up. “Well...we didn’t travel all the way here, and spend all of this money, for you to lose in the first round, now did we?” He’s still looking straight ahead, half-asleep, but the edge of his lip curls a tiny bit, and then we both burst out laughing.
“You’re no bloody good at this sort of thing, are you mum?”
“No, but don’t use that word.”
“What? Bloody? Oh for goodness sake.”
“That’s better.”

So now he has gone off to the expanse of grass across from the courts, to warm up. I have heard his trainer Michael go on and on about the importance of a proper warm-up. I watch him as he jogs slowly back and forth, then starts some lunges. I notice that I am tense, and my right eye is twitching slightly, and I think I may be getting a headache, which may turn into a migraine. I am out of my comfort zone. How is it that a group of thirteen-year-old boys playing tennis can unnerve me to such an extent? 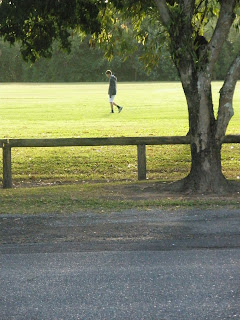 They call his name over the loudspeaker.

I settle myself on a bench beside the court.

The opponent’s family is already there but they don’t turn to look at me. Tennis-parent etiquette is a specialised field, so don’t try to understand it yet...I will attempt to explain later, but don’t hold me to it.

His opponent surprises us both by being of similar height and build. My son is very tall for his age, so this doesn’t happen very often; it unnerves me. Even as it unnerves me I realise how incredibly petty and silly it is to take this match so seriously that it would have such an unnerving effect on me. I can’t help it, and I can’t explain it. 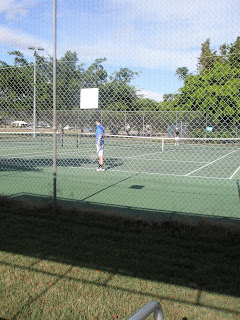 People who know me describe me as being sweet, accepting and unjudgemental. But my close friends and family know that I am a ruthlessly competitive bitch. They still love me though. Go figure.

Now, just as the two boys are about to start the match, I decide to take notes. I decide this because I know that there just might be a fab post to be wrestled out of all of this, but I also know that there is a huge obstacle standing in my way – I do not understand the language of tennis. 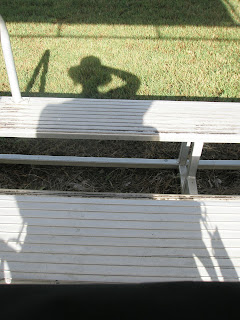 I am not bad with languages. I am pretty fluent in modern Hebrew, and I can work my way around Biblical Hebrew without too much fuss. I aced high school French and then promptly forgot it. I learned basic Russian so as to survive my husband’s family get-togethers. But no matter how hard I study it, the language of tennis is still Greek to me. This is not limited to the actual phraseology, no indeed, for my blind spot also includes the rules and...the scoring. Let me show you my notes from the first set of this morning’s match, and it will illuminate everything:

Opponent serving. A double fault, yeah c’mon! 0-30, I think, 0-40 opponent going long. 2-0. Wait, why are they changing sides now? I know they change sides when games equal odd number, but 2+0=2 which is an even number. ARE YOU SHITTING ME? DID I TOTALLY MISS OUT ON A GAME? I DON’T GET IT.

Son serves. 15-0 after long rally. 30-0 after another long rally. Opponent has a killer cross-court. Son going for his fancy serves, but ends in a double fault. 30-15, 30-30 as son had bad serve, gave point away. Wait, opponent now serving? Who won that game?

Opponent serves. Opponent is a fair caller – son’s shot landed on line and opponent called it in. Have great respect for opponent and his mother. Now feel bad for opponent, he looks tired and winded. Double fault. I’m feeling a bit more optimistic that son can win this set now. Opponent’s shots are going too long. Son has a brilliant down-the-line winner.

Oh, they are going to the bags for towels and drinks?!! Must be the end of the first set. HOW CAN THAT FRIGGING BE THOUGH??? Maybe they are playing some strange new rules? Ok, so it’s now the second set...but who won the first set?

Need I continue? I think not.

The next set went by so fast, I had absolutely no idea what happened. Before I knew it they were shaking hands, and for a minute I thought that the opponent had won. But no, he was just a very gracious loser, because I could tell from my son’s body language as he packed up his bag that he had won. Hooray!!! But how did that happen? I don't get it.

As we walk together back to the office to record the score I turn to him and say “that was really close huh!? Your opponent had a killer cross-court! Scary!” That’s when I saw his lip do that funny curling thing at one end again and he said “actually...mum... I won 6-0, 6-1 and he did do a lot of cross-courts...but not killer ones.”

Later, after we returned to the hotel room, after we swam in the pool, showered, and ate a huge bowl of pasta each (tennis is hungry work), I cornered my son and asked him to go through my notes with me, as a kind of tennis tutor.

We sit side-by-side and I start with something that I hope will earn me some points – “your opponent was a fair caller”. Son looks at me with astonishment. “YES! But how did you know that?” We beam at each other! Score!

I continue with this “your opponent had a crap backhand”. Son nods, but hesitates... “I wouldn’t go so far as to say it was crap...maybe...inconsistent”. I take notes, nodding studiously, and continue.

“It was very windy”. I leave it at that. Son looks at me, waiting for me to continue. I shrug and ask for help. Son smiles and continues the sentence for me: “yeah, well...without the wind I would have smacked him sooner, but with the wind I had to be consistent. Also, on hard court the ball bounces higher, so using high loopy shots can force a weak shot from the opponent and then you can move in and finish the point.” Of course, I nod enthusiastically.

I can feel that headache still lurking in the back of my neck, but I valiantly continue: “you had some problems with your serve?” I add the question mark because I have had some ugly past experiences with bad reactions to perceived criticisms. But son is sweet and thoughtful: “Sort of...I wasn’t trying to smack them my hardest, just making sure they got in with some spin and power. I probably should have taken more time on the serves.”

Son’s attention is now wandering towards the television screen in the living room. My attention is now wandering to the bed in my bedroom. So I decide to finish off with a clear winner: “your opponent’s body language sometimes showed dejection and despair”. Son dismisses my words with a flip of his wrist: “look mum, the way I would put it is...he didn’t give up playing-wise, but he did get a bit down on himself.”

The same can be said for me.

I think my 13 year old would get along very well with your 13 year old.

What a wonderful post. I felt like I was with one of my boys - though we would NEVER be at a tennis match.
There's running in tennis, right?
Yeah.
No.

Keep us posted on his progress!

Still smiling, or rather laughing.. I don't know the first thing about tennis (except that Björn Borg used to rule!)but I sure did recognize the mum-thing!

I imagine when my son has his first football game I will be similarly lost.

I don't speak Tennis, either. But it sounds like your son did good, so YAY!