I have been offered an unexpected job this week, with Friday as the deadline. This is good for the coffer, but not for the blogger. I actually had to temporarily disconnect the internet today so as to force myself to finish the job. That is how terribly addicted I am to you all. Shocking.

So I must now quickly list everything I meant to tell you, and which I have almost forgotten already:

My local supermarket burnt down last week. It was apparently done by a couple of teenagers, which is most surprising as I always expected it to be done by a 39-year-old housewife with a bad case of PMT. Thing is...I keep forgetting that it has burnt down, and so I still drive to that damned shopping centre and then stand outside the blackened shell of the supermarket and stare blankly at it. I have done this three times already. My daughter wrote at the top of the shopping list today "DO NOT GO TO BURNT-OUT SUPERMARKET", and it worked. I had to go to the other shopping centre, which Colours likes to call "The Death Star".

My neighbours have nannies. The neighbours on the right have a British nanny who cares for their two toddlers from 7:30am to 6:30pm. The neighbours on the left have a Greek nanny who cares for two school-aged children; she cooks flavoursome and wholesome meals for them while they are at school. It really shits me to see them do everything I have done for years, and still do, but THEY GET PAID FOR IT. Also, they are both very cheerful, friendly, and energetic. I hate that.

I have discovered that the mere glimpse of a public library cheers me up. I was driving my son to his tennis training at 8pm tonight (annoying, impossible time for driving to courts) and I drove past my local library. It was still open, and I could see the warm, yellow light through the windows, and I even caught a glimpse of a man standing by a shelf with a book. It cheered me up instantly.

I am fretting over the fact that E. M. Delafield died in 1943, at the young age of 53. She would have simply ADORED blogging, I just know it. She would have had a huge blogger following and would have become an international celebrity. Here is how she signed off on the last post of her first volume of "Diary of a Provincial Lady":

Robert says, Why don't I get into Bed? I say, Because I am writing my Diary. Robert replies, kindly, but quite definitely, that In his opinion, That is Waste of Time.

I get into bed, and am confronted by Query: Can Robert be right?

Can only leave reply to Posterity. 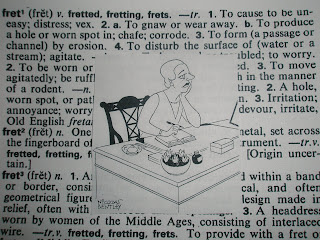 Our usual gas station was closed for about a month for remodeling, and I KNEW THAT, yet I KEPT GOING THERE. I nearly ran out of gas before they re-opened the damn thing.

This doesn't mean we're getting old, does it? It can't be that.

Finding the balance between what you HAVE TO DO (coffer) and WHAT YOU STRONGLY DESIRE (blogger) is so damn difficult. I, too, am a blog addict. My addiction is so bad I leave my Google Reader open AT WORK so I know instantly when someone on my list updates.

Robert is so damn wrong.

I can't STAND the thought of you doing ANYTHING other than updating your blog every day.

No question. Posterity, defined as commencing roughly five seconds after you update your blog, demands that you continue to do so. Your readership concurs.

As an occasional librarian, treasurer of the local Friends of the Library, and one-time trustee on the regional library board, I second your warm and smiley feeling about the library. Such useful places, libraries.

This is so irrelevant to this post but just saw your comment about your father and the $100!

Robert is Wrong.
(but MrM and I had that conversation last night so nothing changes)

Love this post! I'm fretting, not sure over what, but there are things to fret over in this world... Guess that makes me a fretter.
Need to rush off to the local bookstore (can be done in my lunch hour if I hurry) and check out the supply of E.M Delafield. Suspect a not-so-fortunate outcome. Amazon next.
P.S. You should've asked my 25 years ago, I'd have come immediately and been your nanny (this is if you accept the notion of parallel universes).

your last two posts have come together for me because my sisters-in-law all have nannies and they all waited til they were in their late 30s to start having children. One of my brothers-in-law will be 50 before his first child start primary school - can you imagine?! We also started young and I wouldn't have it any other way!