My fab friend Sarah lived with us for many months a while back, and she enjoyed the Jewish festivals a great deal. Not being Jewish herself, everything that I completely took for granted instantly transformed into something strange and exotic when viewed through her eyes.

So you all came over to my parent's apartment for Rosh Hashanah dinner, and boy was it crowded. But that's just fine, because my mother always cooks enough food "for an entire army troop" (my father's words). I have been living in a different country from my parents since I was 18, and they only moved to Australia a couple of years ago, therefore my mother and I are making up for lost time. She cooks and I eat. It's a great system.

To bring in the new year, the women of the household light the candles. Two each for me and mum, one for my daughter. Can you see the pomegranates? They are a traditional new year food (lots of sweet little seeds to symbolise a fruitful new year) which my mum is using here for decoration. See the sweetpeas? My mum is unstoppable when it comes to symbolic decorations, just wait and see.... 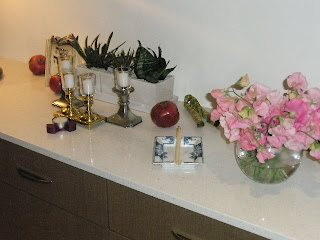 Here is the magnificent table ready for the traditional blessing of the wine and bread (challah). In the centre are the two challahs, but you can't see them because they are covered by a challah-cover. The cover is especially made for Rosh Hashanah and has a decoration of apples on it, apple dipped in honey being a traditional new year food. My mum found a couple of apple candles too! 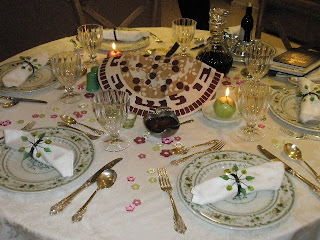 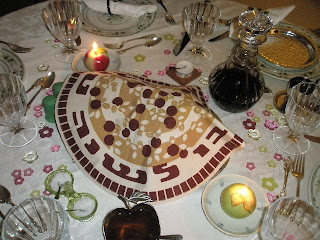 On Friday nights and Saturdays (Shabbat) we usually have two challahs which are long and plaited, but for the High Holy Days we have round challahs with raisins. My mother even bought one (the one on the left) with sweet streusel topping, mmmmmm...... 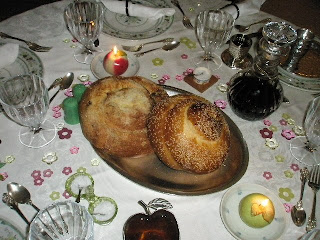 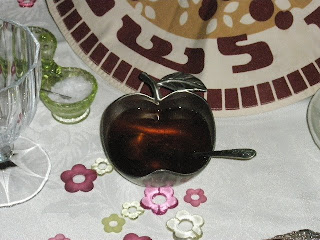 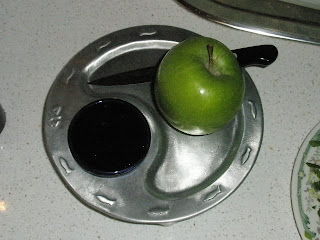 My mother has a special plate for the apple and honey, can you see the decorative fish motif? Fish is another symbol, fertility I think. 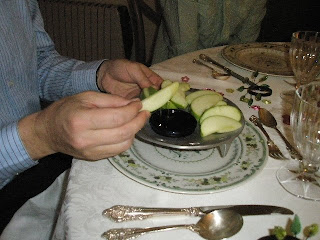 Mr. Commentbox was happy to demonstrate. Oh, by the way, the silverware was my great-grandma's, and it has her initials engraved on it. Yes, this is the meaty set, we're having turkey. 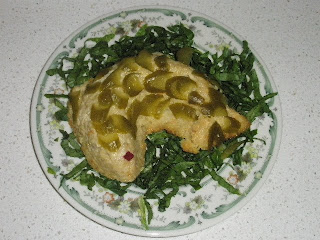 Usually, gefilte fish is made into boiled balls. But that's so last year. My mother made gefilte fish fish molds, with pickle scales and a bed of lettuce "seaweed". 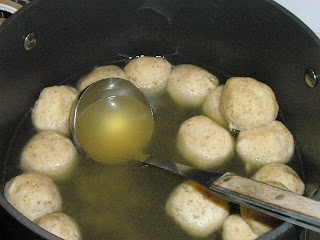 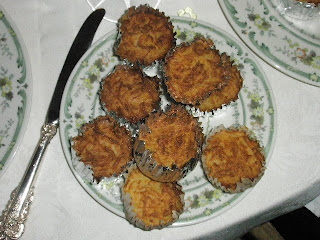 Potato kugel (pudding) is usually made in a rectangular pan, but again, that's so boring, so my mum made little round kugels. So, so cute. 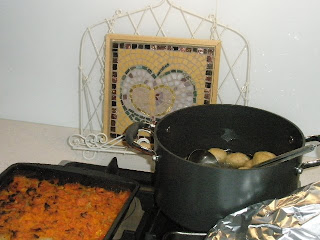 Spot the apple mosaic! My mother actually made it herself a few years ago. The orange dish on the left is carrot tsimmes (great-grandma's recipe). It has a dumpling-type base (much like the matzah balls) which is sweetened, and then a layer of sweetened, boiled carrots is placed on top, and crisped in the oven. Step away from the tsimmes ladies, it's MINE, ALL MINE. 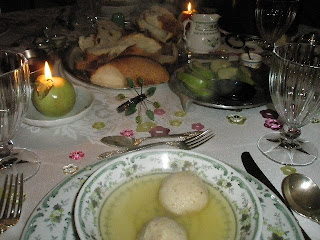 I took a picture of the HUGE turkey, but it looked kind of....obscene. So here is a very polite picture of my plate with a slice of turkey. After I took the photo I doubled all of the portions, but you can all believe this is the actual amount I ate, because we are virtual friends, so as far as you know I eat like a bird and have a sylph-like figure. I'd like to maintain that virtual image for as long as I can. 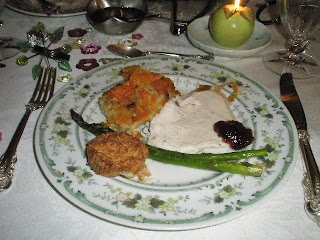 I grew up with this china pattern - it was our "meaty set" for as long as I can remember. My mother always insisted that when I set the table the "basket" had to be facing up. My one major rebellion during my teenage years was having the basket facing sideways or even, GASP, down. I was a wild child. 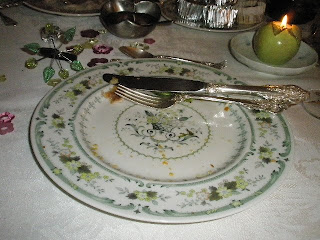 Most honey cakes are square or rectangular, but that's BORING, so my mother's is in the shape of a flower. Of course. 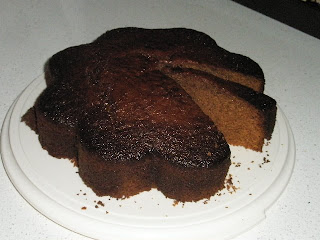 So thanks for joining us, I'm glad you had such a good time, and I hope each and every one of you enjoyed the little "goodie bag" my mother gave you, you know, for your trip back home, so you wouldn't, god forbid, get hungry.

Oh, and a recipe, as promised! This cake freezes very well and, in fact, tastes even better after being frozen and then defrosted. Really!

Cream all well **EXCEPT FLOUR** using large bowl of mixmaster.
Then add flour – beat until mixed through.

Beat till mixed through.

The batter will be very thin. Don’t worry!

Lovely meal! BEAUTIFUL silverware and dishes. Everything looks delicious. I have GOT to try that honey cake.

Thanks for sharing your New Year's dinner. Since I'm not Jewish I don't know if it's more appropriate to say "Happy Rosh Hashanah" or "Happy New Year". Whichever it is, have a happy/prosperous/wonderful one!

Thanks so much for sharing this time.

I laughed at your act of rebellion!

But, then I had a bit of a revelation with some behaviour my daughter has been exhibiting - a light bulb went off. So thanks.

Well, that was delicious! I'm stuffed!

And wait a minute... there's a CHEESECAKE HOLIDAY? You'll be inviting us back for that one, right? I'll bring the wine!

I am SO hungry now!

Your mom has done an extraordinary job of making traditional dishes new again - everything looks wonderful and I have a new appreciation for a New Year's meal.

Gasp! This is the most wonderful post. Thank you!!!

It has told me everything that I wanted to know and more. It is fascinating. Your mother is obviously an inspirational cook - can I persuade you to let us peek into the celebrations for other festivals?

The goody bag didn't even make it down the driveway. That's why I came back and rang the door bell again. Yes, I know it was awkward. I'm aware of that.

My apologies for finishing off the tsimmes and honey cake when no one was watching.

I got carried away.

Oh, one more question. When are we to come back for leftovers?

Hope you don't mind me joining in your meal. Alice C said it would be alright and to just come take a seat at the table.

Thank your mother for the fabulous food for me. I was hastily stuffing more in my mouth as I left so she may not have heard my gratitude and goodbyes. They were heartfelt.

I enjoyed this meal so much. Your mother fed us with food and also with care and attention to detail.

I too need to make that cake.

Thank you for sharing this wonderful celebration with your photos and words.

Thanks for sharing, it looks like a wonderful new year celebration! I love jewish holiday food, and reagularly make honey cake, latkes and tsimmes but like Badger I didn't know there was a cheesecake holiday!!! Tell me more. Thank your mum for having us all over, she's a very gracious hostess.

Is it kosher to say that you Jews have all the fun?

What do you mean, what am I doing here in your kitchen? That's a strange question, don't you think? What are YOU doing here? What are any of us doing here...on this little blue and green planet, spinning through space?

Wait. Don't put that away. I'm not finished. There's still a little left.

I'll just let myself out then.

Is the honey cake behind my back?

What do mean I need to show you BOTH HANDS?

You know, this makes me think of my stepmother - who is Jewish. She would just adore this.

She has two daughters and one son, none of which are 'practising' Jews (is that a term? are they lapsed?) which upsets her deeply.

The only thing which upsets her more is her children's complete disinterest in their heritage and the story of their family. Which I of course find infinitely fascinating, tragic and exotic.

What a beautiful, great post! Thank you for sharing the fascinating traditions.
Yes, love the act of rebellion too! Mine was to sleep in on a Sunday! (and then of course go to the 'groovy' Mass at 6pm!)